The architecture complex known as Nymphaeum is made up of a series of symmetrically located rooms, where the art collections of The Borromeo Visconti Litta Family were displayed: paintings, fossiles, minerals, coins, sacred relics, automatisms, mechanical instruments, archaeological findings.

This building was erected between 1585 and 1589, on a project by Martino Bassi, has a rigorously symmetric rectangular plan.

The south facade is enriched by stucco statues and two stone balustrades lead to the inner octagonal hall, the so-called Hall of the Four Winds.

The octagon is an exit point: proceeding northwards, along the longitudinal main south-north axis, you end up to a garden area bordered by 6 marble pedestals, where once, as many bronze statues were positioned; whilst moving inside the Nymphaeum you proceed east-westwards crossing the main south-north axis.
All of the rooms are almost completely covered with mosaics of black and white pebbles composed to create intricate geometrical and floral patterns. Decorations are different in each interior and repeat symmetrically on the walls of every room.
The ceilings of the northern rooms present an absolutely original technique realized between 1587 and 1589 by Camillo Procaccini (about 1550-1627). It is the "painted pebbles technique" and, as far as we know, it is an unicum in the history of the mosaic-laying art.

In the old grottoes an hemicycle is covered with pebble mosaics and stalactytes and its niches contain Pan statues adjacent to seats. Beyond the hemicycle there is a labyrinth leading to a covered gallery decorated with mosaics in coloured pebbles.

By entering the gallery you can admire three naiads in white marble. The statue in the middle, according to a popular tradition of Lainate, is called "La Vegia Tuntona" ("The Old Temptress"), synonymous with perdition and sinful life.

Another interior, isolated from the global symmetry, is an octagonal court without roof: The Rain Court.

The north facade of the building is characterized by two long symmetric walls covered with sandstone, two wide hemicycles resting upon Ionic columns and two niches containing allegories for Dawn and Twilight. 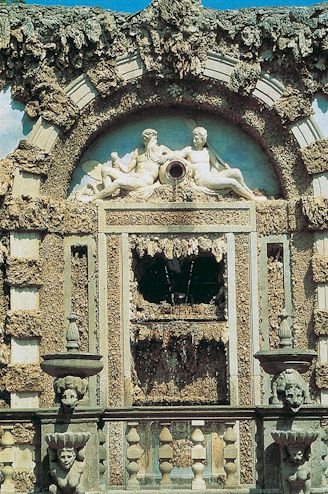 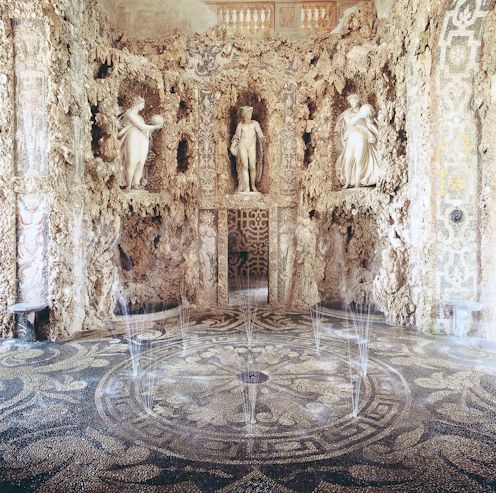 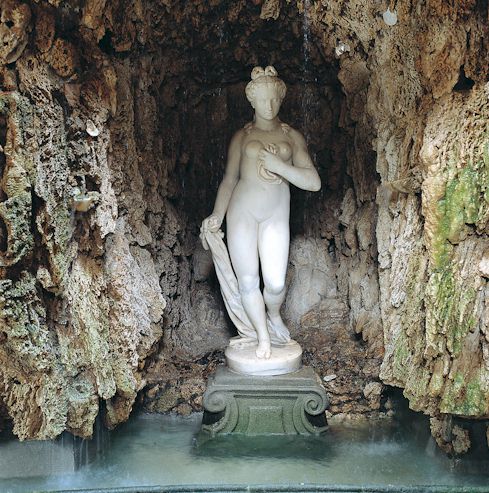 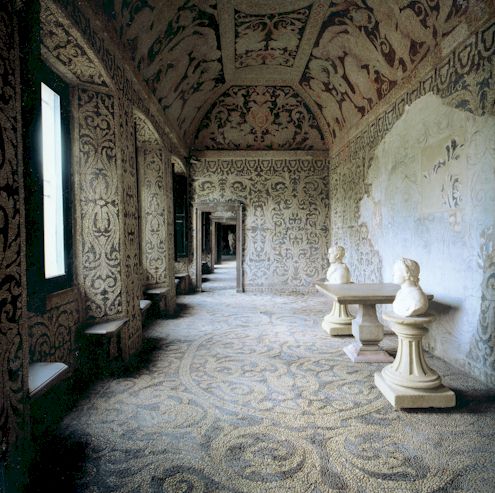