Chronology of the restauration work at the Visconti Borromeo Litta Villa

The monumental complex of The Borromeo Visconti Litta Villa was purchased in 1971 by The Town Council of Lainate for 220 million Italian Lire (about 115.000 Euro). The acquisition of this estate, which surface well exceeded the needs of The Town Council in that period of time, encouraged to open part of the historical garden and to locate The Public Library in a section of the 18th-century wing of the mansion. Today, the Library is partially positioned in some rooms located in the 16th-century wing.

Successively, The Town Council began the initial restoration work and, after evaluating the conditions of decay of the Nymphaeum, as well as, of its hydraulic system, The Monuments and Fine Arts Office in Milan was informed of the possible risk of total loss of this monument, which thereby awakened interest in The Borromeo Visconti Litta Villa.

In the early 1980s, with the support of The Monuments and Fine Arts Office, the restoration work on the Nymphaeum started: the roof and the Court of Rain. Some years later, The Cariplo Bank sponsored the restoration of The Galatea Fountain. In the meantime, The Town Council of Lainate and The Monuments and Fine Arts Office in Milan organized a press conference to illustrate a programme regarding a series of restoration works financed by private entities. These contributions amounted to a total of 415.000 Euro taking into consideration the period from the date of the press conference to June 1996.
During the same time, The Town Council carried out the restoration of the 16th and 18th mansion wings, and with the contributions and support of private entities, managed to complete these works.

In 1992, The Town Council of Lainate was given a subvention (The FRISL fund, to be reimbursed) by The Lombardy Regional Office for the restoration of the Nymphaeum, the water games hydraulic system, the east greenhouse and a part of the Renaissance gardens.
The Monuments and Fine Arts Office in Milan additionally contributed with a substantial amount of State funds.
The restoration work was completed by the foreseen date and the inauguration of Nymphaeum and water games took place on 14th September 1996.

On 22nd October 2000, the interiors of the 16th and 18th mansion wings were inaugurated, where frescoes of considerable worth have been restored and re-positioned on the vaults.
In May 2001, the restoration work regarding the final Nymphaeum's room was completed. Furthermore, The Lombardy Regional Office in November 2001, appointed the monumental complex of The Borromeo Visconti Litta Villa as ""Museum".

In 2006, the sculpture group in terracotta representing "The Rape of Proserpine", located in an exedra in the northern area of the Italian garden, was restored. The said intervention was possible due to the revenues obtained from the guided tours, which also included an overall control of the supporting structure, the treatment of the iron items, and the consolidation of the terracotta surfaces of the figures.

Another important restoration work, achieved in September 2007, was the Great Mosaic, the majestic floor composed of black and white pebbles that closes the north facade of the Nymphaeum. The restoration was co-financed by The Fondazione Banca del Monte di Lombardia, it was preceded by a careful graphic and photographic mapping, with the prior removal of the pebbles by hand, the mosaic re-laying through the preparation of the pattern design, and the integration of the missing parts with other pebbles of the same shape, colour and dimension.

Other consolidation and restoration works are currently on-going.

Hereafter, and to the right, photos of part of the Nymphaeum's interiors, before and after, restoration can be seen. 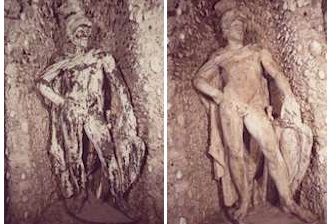 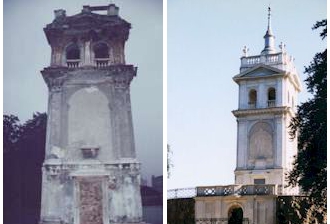